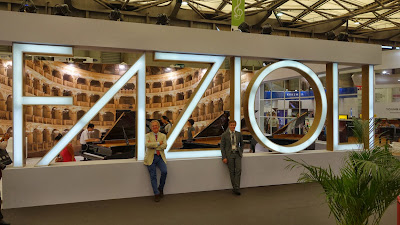 SHANGHAI, CHINA - Over 60,000 visitors and over a 1,600 exhibiters came together to celebrate the international Trade fair for Musical Instruments and Services (Musikmesse) at the Shanghai New International Expo Centre this year from the 10th to the 13th of October.  The four day fair was packed full of educational activities and live shows; visitors had the wonderful opportunity to learn about the latest industry trends.

The Fazioli booth received much recognition and popularity as many visitors stopped by over the course of the four days to take pictures with Mr. Fazioli himself and the best pianos in the world! Since the first introduction of the Fazioli pianos at Frankfurt Musikmesse in 1981 many well-known artists have been drawn by the incredibly responsive keyboard and clear tone such as Alfred Brendel, Martha Argerich, Vladimir Ashkenazy, and Louis Lortie.

Showcase Pianos owner Manuel Bernaschek was invited by Fazioli Pianoforti to attend the the entire four days of the show and serve as translator for Mr. Fazioli.

Not only noted for creating the most beautiful pianos, Fazioli is also the maker of the largest piano available on the market with the F308 measuring in at an amazing 10ft 2 inches, this model also features the inclusion of a fourth pedal that helps to decrease the volume by bringing the hammers closer to the strings without affecting the quality of the sound; a common issue pianists have with the soft pedal.  There’s no telling what innovations will happen next but the future certainly sounds sublime!
Posted by m + j at 3:10 PM