VANCOUVER, BC - Be sure to pick up the April 2013 issue of Vancouver Magazine where legendary writer Malcolm Parry was invited to pick up his pen once again for the iconic publication.  It has been 2 years since Mac has written a word for the magazine, so his return was made more special when he was asked to interview Italian pianomaker Paolo Fazioli.

Part of the article focuses on the 50th Fazioli to sell at Showcase Pianos - a special half-million dollar concert grand with a case designed by Vancouver architect Ernest Collins. 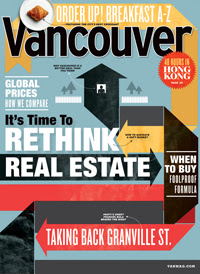